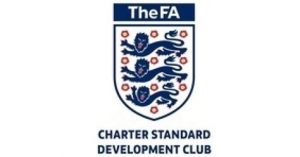 Tournament rules are covered by normal FA Mini-Soccer rules, with the following exceptions and clarifications:

· All players must have been eligible to play in the appropriate age group for the 2019/20 season. You must have ID for all players and if requested it must be shown.

· Up to 3 substitutes allowed (will be roll on, roll off as permitted by the Referee).

· No player may play for more than one team.

· Above Crossbar Height Rule for U9s and above (6 aside)

· Above Crossbar height is determined as an infringement when the whole ball passes above the height of the crossbar.

· When the above crossbar height rule is infringed, an indirect free-kick shall be taken from where the ball was originally played.

· If the ball goes above the crossbar off the goalkeeper, or as a result of a tackle from another player or a rebound from the goalposts or fixed equipment then play shall continue.

· The heading of the ball is allowed, provided that the contact with the head is below crossbar height.

· The Referee’s decision is final.

· Where the ball leaves the area of play for a throw-in this will be replaced with a kick-in.

· Kick-ins will be Indirect, opposition players must retreat at least 2 meters from the kick.

· The tournament for each age group will be made up of 4 groups, each of which will consist of 5 teams. Please note this may be subject to change depending on teams entered on the day.

· Under 6s, 7s and 8s will be non-competitive and no tables shall be kept. There will be NO knockout stage and every player will receive a small memento for taking part.

· Under 9s and upwards will be played in competitive groups, the top 2 teams from each group will progress to a knockout stage where there will be quarter finals, semi-finals and final.

· Group match duration will be dependent on the number of team entries on the day (e.g.12mins or 15mins) but will be played straight through, i.e. no half time interval or turn-around. Playing times will be advised on the day but all managers are responsible for ensuring that no single player exceeds the F.A. guidelines for ‘Total playing time in one day’.

· Shin pads must be worn by all players at all times whilst playing and all jewellery to be removed.

· Normal FA rules apply for group qualification, 3 points for a WIN, 1 point for a DRAW and 0 points for a LOSS. Group qualification will be decided by the highest number of points awarded. If teams are level on points then it will be decided on 1) head to head result between teams concerned 2) goal difference 3) greatest number of goals scored 4) taking of penalties, 5 penalties maximum for each team followed by “sudden death” if the scores are still level.

· For the knockout stages game time will be 12 minutes in total with a turn-around at half time. If it is a draw at the end of normal time, NO extra time will be played, a penalty shoot-out will take place consisting of 5 penalties maximum for each team followed by “sudden death” if the scores are still level. The players on the field at the final whistle will be the penalty takers, in the event the scores are still level after the initial 5 penalties then the remaining players shall take a penalty before any of the original 5 penalty takers can take another.

· All free kicks are direct except above crossbar infringement.

· All other F.A. Mini Soccer rules will apply including the retreat line for U6 to U10s.

· A player who is sent off for misconduct shall not be permitted to take any further part in the tournament, he/she may be replaced (by a team mate nominated on the team sheet) for subsequent matches, but not in the match during which he/she was sent off. This tournament uses the BLUE Card system where a player cautioned is sent to a sin bin for 2 minutes but the caution is not sent to the County FA but recorded by the Senior Referee. Two blue (yellow) cards in any one match equal a red card, whereas an accumulation of two blue (yellow) cards in the tournament results in a player being excluded from any subsequent matches. Registered Referees shall control all matches where possible and all misconduct or straight red card offences will be reported by the referees to the appropriate County FA.

· Qualified Referees appointed by Letchworth Garden City Eagles YFC will officiate and their decisions will be FINAL in all matters relating to the laws of the game and rules of this tournament. No disagreements with the referees will be tolerated. Any matters arising that are not covered by these rules will be dealt with by the tournament manager. In the event of any dispute the decision of the organising committee will be final.

· Letchworth Garden City Eagles YFC will NOT be deemed responsible and can accept NO liability whatsoever for any accident, injury or loss that may occur, however caused, throughout the duration of the tournament.

· Letchworth Garden City Eagles YFC adheres to the FA Respect policy and has a zero tolerance policy on bad behaviour. No supporters are allowed in the designated pitch areas (as roped off) no more than 2 team officials should be pitch side at any time and it is the Team Manager’s responsibility to ensure this. Managers should not enter the field of play unless instructed by the Referee. Failing to comply with any of these points can result in the game being stopped and possible exclusion for the remainder of the Tournament.

You can download a copy of these rules here:

Avoid disappointment and get your team entered as soon as possible as places are usually filled very quickly!

Avoid disappointment and get your team entered as soon as possible  – places are filling FAST!

Can’t find what you’re looking for?

If you cannot find what you are looking for on the website or you need more information please e-mail us at:
tournament@letchwortheagles.org.uk
with your question and we will answer as soon as possible.

How to find us